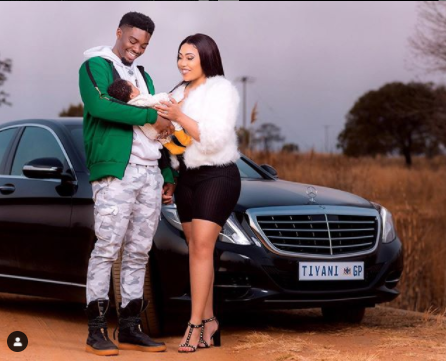 Baby Tiyani Kemorena Michael Chinyani’s birth has been one of the most fascinating chapters in the birth of celebrity child’s in ZAleville. This following the news of his surprise arrival.

The offspring of starlet Simz Ngema and TV hearthrob Tino Chinyani, was welcomed into the world in June, but his arrival was kept hush hush. The news of his birth raised eyebrows and had Mzansi giving his parents a stamp of approval for being the G.O.A.Ts. of keeping their relationship private and the arrival of him under the wraps.

Take a look at these 5 interesting facts about baby Tiyani.

1. His baby bump and gender reveal.

No one saw it coming that Tino and Simz were an item. The announcement of Simz’s pregnancy left many shook, but besides it raising eyebrows, Mzansi congratulated the couple and expressed how happy they are for them.

The lovebirds debuted the starlet’s pregnancy in a stunning maternity shoot. Simz reckoned that God wiped her tears away and gave her a joy in abundance, following the death of his husband Dumi Masilela.

The couple also revealed his gender of Tiyani in a cute social media post which featured their hands holding a pair of blue baby shoes.

Indeed there is a God in heaven. He wiped away my tears and gave me joy in abundance. You’ve brought hope and purpose to my life. @tino_chinyani I will forever be grateful to you for this beautiful gift and for teaching me how to love again. I love you both with all my heart.

Tiyani merged two African countries as his father is Zimbabwean and his mother is South African. As soon as the two made the announcement that they are expecting, both countries were on cloud nine and some even named Tiyani Baby Afrika/ Nations.

Congratulations on the arrival of baby Afrika😘😍❤️💃

3. His parent’s romance and sizzling baecation.

Tino and Simz have been raising the bar high by setting their own relationship goals. The couple recently headed out to a spa treatment and they posted a video cuddling and kissing setting social media streets ablaze!

Tino recently posted a snap of Simz holding her baby bump in his Instagram page and the actress replied by saying “: I love you dzaddy! , hmm.. love truly lives here!

Baby Tiyani’s arrival was iconic. Mzansi learned that even before Simz debuted her baby bump, the starlet had already given birth to her bouncing bundle of joy.

Ladies & gentleman for a long time coming, it’s been a vision of mine to redefine how we as Africans are perceived. 🌍👣 @tiyani_afrika seeks to infuse the modern aesthetic & with distinctly African touches articulated through the use of imagery, colour & unique design, to break boundaries & refine class whilst being synonymous with comfort & ground breaking design. By marrying these elements I give to you what has been a dream long in the making. My legacy continued… The birth of my son; TIYANI CHINYANI & the gift of this brand. 🤍🕊 I give to you a beautiful insight to my soul personified. I pray you enjoy it as much as I do. . Pre-order now. 🔌🤓 . Link for full mini movie in my Bio 📺🔋 (Like, Subscribe & Share.) . Directed by: @Tino_Chinyani Videography: @domkorb , @tvbmediaco Videographer: @nhlanhla1802 Photography: @optimass_art Drone: @sheldonparker_ Bags: @shopluxity Cars: @Dadasmoterlandza Location: @Yolo_spaces_ Assistant: Lex @MaadModz BTS: @Trizzle37 Private chef: @Foodgeniustats

Tiyani is one lucky child who has already inherited his father’s legacy, whose clothing brand Tiyani, is named after him.

Debuting his brand Tino said in a post “My legacy continued… The birth of my son; TIYANI CHINYANI & the gift of this brand. 🤍🕊I give to you a beautiful insight to my soul personified. I pray you enjoy it as much as I do.”