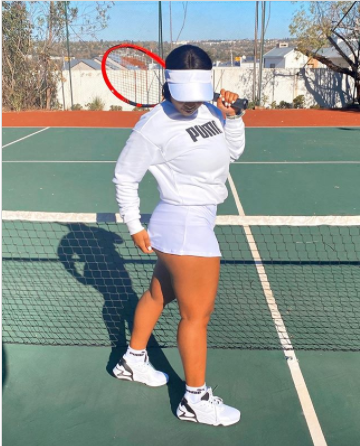 The “Own Your Throne” personality is clearly showcasing the this is her week of wins when you consider the work the good sis has put in this past week. First, she was on the promotional campaign for her newly launched “Boity Pink Sapphire” Eau de Parfum. Boity slowly worked on quieting the matter of “Roach Gate,” and put her focus at endorsing the perfume.

The move proved to be a good on considering her apology that fell flat. Ahead of the official launch of the fragrance, Boity had taken to social media to announce that pre-order sales for the perfume had sold out. The exact amount was 1 000 perfumes of Boity’s signature scent had already started to be delivered to their owners that were going to smell like her.

To celebrate the official launch of the perfume, Boity host an exclusive launch on rooftop. The launch was filled with all our faves and revealed surprising friendship too. Included on the guest list was the expected like Somizi, Maps Maponyane, Thickleeyonce, Sarah Langa, Khaya Dlanga. Then was the surprise of personalities like Moozlie, Pearl Thusi and Jessica Nkosi, who was attending her first outing since the lockdown begun!

The addition of the awesome-foursome that was missing their last member, DJ Zinhle, was surprising considering Boity’s close relationship with Bonang Matheba. That is probably why the Queen B* opted to sit this one out and spend time at home sipping on her own MCC brand, House of BNG.

But Boity closed the week of wins with a last blow which is meant to break the internet. Boity posted a series of images showcasing how she has lost all the undesirable weight she wanted to lose. The images reveal that as much as she had wanted to lose weight, Boity has fully embraced her womanly body and is proud of it. Her caption also made sure that you know that she is feeling herself as much as people think she is.

Advertisement
Related Topics:Boity Thulo
Up Next

VIDEO: Ntando Duma’s daughter preaching affirmations will leave you deep in the feels