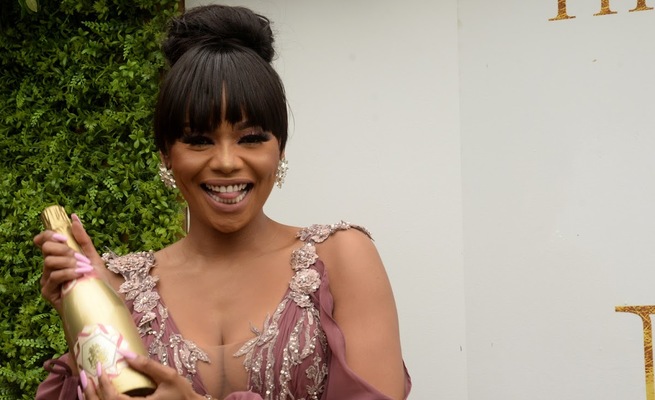 South Africa’s queen of, well, everything, manages to trend no matter what she does.

From her sexy holiday snaps, to the funny phrases she uses on her show (admit it, you’ve also used “moghel” and “Champagne darling” at some point), fans are quick to spread the word. Now, her interview on The Breakfast Club – an American radio show based in New York City and hosted by DJ Envy, Angela Yee and Charlamagne Tha God – have people talking.

Queen B and the show’s hosts discussed several topics, but what caught the attention of local fans was the discussion around marriage and kids. Asked if she was married, Bonang said no, but explained why she wears a huge rock on her ring finger.

“It’s called ‘stop nonsense’,” she said, pausing while the hosts laughed. “I swear, in South Africa a wall, a barricade that fences your house, is called a stop nonsense,” she said.

When asked what she does when she wants attention from the right guy, she responded with: “Men actually don’t approach me. They don’t, and it’s okay. But I will eventually have children and get married when I’m done – when I find a nice guy. I think men in general are a tough category, they’re a very tough wall to break down. Men are strange, hey,” she said.

When Charlamagne Tha God jokingly said he used to be a man but turned into a god, Bonang laughed in the most contagious way and said, “Modimo ke o (Here’s a god).”

Had the pleasure of hosting South African media personality, author, producer and businesswoman @Bonang_M this morning 👸🏾🇿🇦 Watch the full interview on our YouTube page!!! pic.twitter.com/gPJ6er55mo