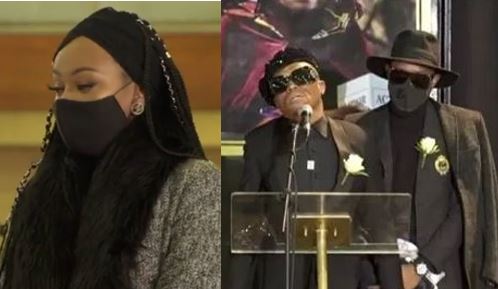 Bonang who was bashed for not sending her condolences to Somizi for the passing of his mother vindicated herself by attending the burial ceremony on Thursday.

Despite the breakdown of their friendship many years ago, Bonang proved that when it matters most she will be there for people she cares about.

Y'all bashed Bonang for not tweeting her condolences. Instead, she pulled up to support Somizi in person. Nithini ngok? pic.twitter.com/iA4u0Wv0ZY

Why are you guys making it such a huge deal that Bonang attended the funeral ?!#RIPMaryTwala pic.twitter.com/ZncOQa0uST

Bonang is such a good friend, supporting Somizi during this trying times #RIPMaryTwala pic.twitter.com/avM9HUvNCa

While others were Tweeting their condolences Bonang Attended. It really doesn't get anymore sincere and personal than that. #RIPMaryTwala pic.twitter.com/mHT5Kzds0v

I still cannot believe that Twitter people expected Bonang to send a condolences message to Somizi when she actually has his numbers and most importantly they are friends and she went to the funeral. The entitlement! https://t.co/ud1d4dogem

Bonang didn't tweet anything via #marytwala passing.. She trended! She attended the funeral she's trending.. What a real Queen ❤️👑💯 and she's didn't have to say anything.. But boom! Number 1 on trending topics pic.twitter.com/cy9bGh5t5P

@bonang_m knows the meaning of through trails and tribulations I'll be there for you. 🙌🏼🙌🏼 #RIPMaryTwala ❤ pic.twitter.com/Z8fHkMLYch

Advertisement
Related Topics:Bonang Matheba
Up Next

SAD: TV star Somizi Mhlongo, has paid a moving tribute to his late mother Mary Twala at her funeral(SEE VIDEO)