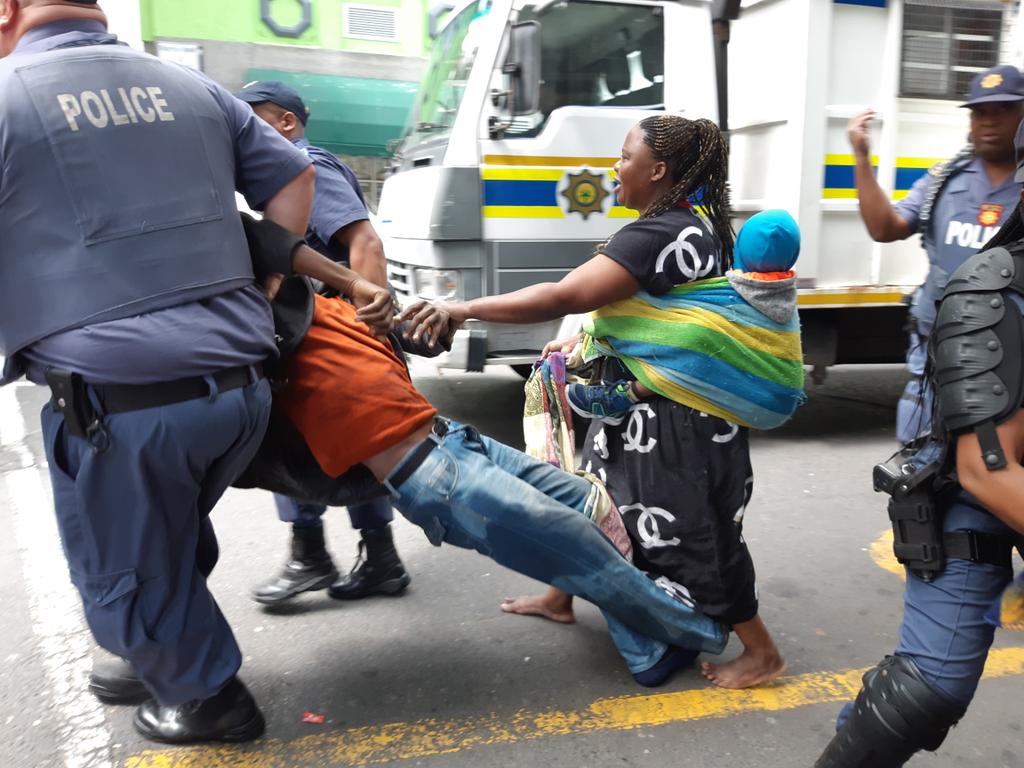 Police have removed hundreds of foreign nationals and refugees from an area outside the offices of the UN High Commission for Refugees in Cape Town – the site of a weeks-long peaceful sit-in protest over their safety in South Africa.

On Wednesday, multiple police vehicles and police officers gathered around the site in St George’s Mall in the Cape Town CBD and removed the protesters.

For weeks, the protesters have asked to be evacuated from the country to find safety amid fears of attacks against foreign nationals.

The situation is chaotic and many people are bleeding. Broken possessions are strewn in the road. Some children have been separated from their parents.

Western Cape police said in a statement that about 100 people were arrested after “they failed to heed the call to disperse”.

Police were assisting the enforcement of an October 18 court order to evict about 300 refugees and asylum seekers who participated in the peaceful sit-in protest. The landlord of the property applied for the order.

“The SAPS (SA Police Service) in the Western Cape is aware of earlier efforts to engage the group facilitated by roleplayers such as the UNHCR to resolve the impasse in an amicable manner. Unfortunately, the attempts yielded no positive result,” a police statement read.

“With a court order in place, the SAPS is obligated to support its execution by the sheriff. Law enforcement officials from the City of Cape Town and the police’s Public Order Police are henceforth on site.”

Officials from the departments of social development and home affairs

People are bleeding, hysterical, being separated from their children. Children are screaming. People being dragged into police vans. Police in Waldorf Arcade. No mercy. #Refugees #CapeTown. Zackie Achmet telling them they are being violent. Stum grenades @TeamNews24 pic.twitter.com/TGvPsd8o0n

Absolute chaos in Waldorf Arcade, St George's Mall, Cape Town as police remove foreign nationals in a sit in since Oct 8 to be taken to a safer country duento xenophobia. One woman seems unconscious, many people are bleeding. @TeamNews24 pic.twitter.com/G3mFgil9Nx

Refugees and asylum seekers have 16 minutes to leave their sit in as Pops line up to remove them from their sit in in #CapeTown CBD. Police say the UN will not help them. There are children in the large group @TeamNews24 pic.twitter.com/HzblcALczK

A woman says "please kill us" to a Pops cop as police say they have 10 minutes to leave out of their own free will otherwise police action will follow. The sit in from Oct 8 was to be evacuated to a safer country @TeamNews24 pic.twitter.com/UNpgDYzHrt