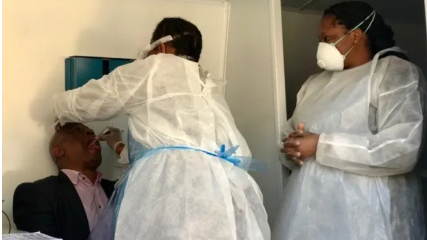 And it makes you feel useless as a doctor to have to say that to someone. But there’s nothing else we can do. It’s been drilled into our heads as healthcare professionals that in a pandemic there is no emergency, which is difficult to get your head around when working in an emergency department. Really, it’s about the greater good for the most number of people.

What you can do as an individual is protect your neighbour, friends and colleagues by staying away from them, keeping your mask on and washing your hands. There’s not much else you can do other than that, really.Some people are going to get it, other people aren’t, and the doctor’s job is to limit infection rates as quickly as possible so our hospitals are not packed to capacity as they are now.

When case numbers were low, we as doctors had a sense of peace with the fact that we would all get infected. As the lockdown lifted, the reality set in that our PPE was not going to be enough to protect ourselves or patients. We could finally feel the pandemic, and it was a new and uncomfortable feeling.

We each have different ways of coping, as all people do, but the anxiety in our normally jovial working environment has become palpable. We aren’t smiling that much anymore, but behind the masks, that doesn’t seem to matter. Most of us realise we have an important job to do; we are avoiding our personal feelings and bracing for the impact.

We could finally feel the pandemic, and it was a new and uncomfortable feeling.As the SA situation has worsened, we have been thinking more about our families. Everyone is ridiculously overburdened. In the beginning we had pay cuts and reduced shifts. I’m lucky that I work in a private hospital as shifts are 12 hours. But now we are seeing patient numbers we are not used to. And those patients are generally more sick than before the pandemic. My colleagues in the public hospitals have it worse. All SA doctors have experienced the long, unforgiving hours in their careers, but from what I hear, this pandemic has brought a new level of exhaustion.

Some doctors are rather flippant. Others are militant in their PPE protocols and taking measures to protect themselves. If you do test positive, the worry is you don’t know if you’re going to get a more serious illness. I also have the added anxiety that if I am asymptomatic, am I going to unknowingly infect my friends, colleagues and patients?

You hear a lot of people say that working in emergency rooms takes a different kind of person. We know we are the cowboys of medicine. But part of the thrill of being on the frontline is making an immediate difference. Last weekend I lost my sense of smell and taste while at work. I asked the lab technician to swab me because it’s one of the symptoms. On Sunday I learned I was positive.

Remarkably, I’m feeling pretty good, so I feel a bit stupid stuck at home for two weeks. But it is what it is. I’m asymptomatic. Realistically, we all expect to get the virus, so I’m glad to have the mild symptoms rather than the more serious ones.Part of my job requires me to be on call for a few different emergency departments around Joburg. On-call days used to pass uneventfully, and often I would forget I was even on call.

Realistically, we’re all expecting we’re going to get it so I’m glad to have the mild symptoms rather than the more serious ones.Last week I was on call twice. I was called out on both days, to different hospitals. This is not normal. With a fellow doctor and a clinical associate – who were already there – I struggled for the better part of those days to stem the flow of a pandemic that had finally hit. We have been waiting for this, so we aren’t particularly surprised.

What did surprise me was the attitude of the people I helped. I understand this is scary, and I acknowledge we’re all learning on the fly. Anyone who says otherwise is a danger.I entered one emergency room after rushing as fast as I legally could. My call-out activation was for “three P1s”. A “priority 1”, or “red”, patient requires immediate lifesaving intervention. It’s a pretty important thing.

I walked into the Covid resuscitation area. The doctor who was already there was intubating one of the patients. I started sorting out the others. The patient who was tubed was a “private” patient. That’s someone who doesn’t have a medical aid who presents to a private hospital. Our job in that situation is to stabilise and provide any required intervention that will save a life. He was stabilised. The next step was to transfer him.

Advertisement
Related Topics:coronavirus
Up Next

which telenovela is better: Gomora vs The Queen