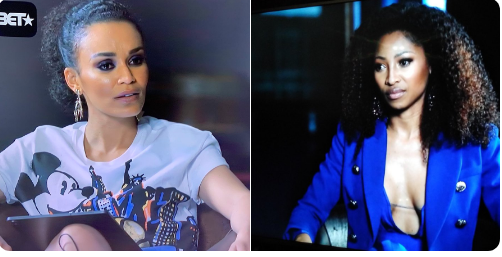 Enhle Mbali has responded to reports earlier this year that she had split from her hubby, DJ Black Coffee, telling Pearl Thusi on Behind the Story that she would let the public guess.

The episode that aired on Wednesday night saw Enhle talk about her upbringing, the lack of a father figure in her life as a child and where she and Black Coffee were at in their relationship.

There has been swirling speculation around Enhle and Black Coffee’s love life since a report by City Press in July claimed the pair were getting divorced because of Black Coffee’s alleged infidelities and “meddling family members”.

Enhle wasn’t about to spill the tea, saying she preferred to keep some things private.

“I think the public knows nothing and that’s why I let the public throw their assumptions. I never confirmed or denied anything. Anything that I speak from my private life is from my own voice. Let them speculate until then. I have said nothing, Nathi has said nothing.”

When asked about her marital status with Black Coffee, Enhle reiterated that there were children involved and she would continue to wear her heart on her sleeve. “Once I love, I love.”

Some fans said Enhle didn’t owe anyone an explanation about her marriage. Others felt she was unfair for not answering Pearl’s

Advertisement
questions, as she had asked DJ Zinhle deeply personal questions when she recently interviewed her on her YouTube channel, Simply Yours – Enhle.

During that interview, Enhle asked Zinhle why she decided to give her baby daddy, AKA, a second chance after she found out he had “cheated” on her.

Zinhle later said she was caught off guard by the question.

When asked how she felt about the backlash she received from the episode, Enhle said: “Unfortunately, as celebs, they had to live their lives in the public eye and the show was all about giving women the platform to speak their truth.”

Here are some of the reactions to Enhle’s interview with Pearl:

Our society celebrates people's unhappiness, especially in marriages, whether real or imagined.

They pretend to be concerned publicly but they gossip and laugh at you behind closed doors. Enhle is smart enough to know this.

You are mad cos you are that society.#BehindTheStory

Is it me or does Enhle Mbali seem a bit edgy/uncomfortable/angry ? #BehindTheStory

VIDEO: ‘Drunk’ Zodwa Mows The Lawn In Her Heels