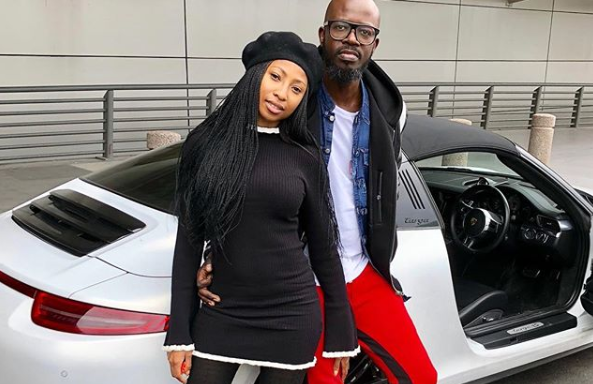 Nobody would’ve blamed her for being bitter.

In fact, many were outraged on her behalf and couldn’t believe the humiliation she’d had to endure. Not only had her husband of nearly 10 years cheated on her, he revealed intimate details of their crumbling marriage to a national Sunday newspaper without her consent. It would have been enough for any normal woman to see red. But then Enhle Mbali is no ordinary woman.

Apart from an Instagram post in which she revealed her union with DJ Black Coffee was on the rocks, she’s maintained her silence despite him opening up about their split. And, as her fans would know, she threw herself into being a good mom to her two sons and put extra effort into expanding her career.

Her hustling paid off and Enhle (32) started 2020 on a high note after what she says was a “very, very, very rough year”.

She’s back on the small screen after landing a role in Mzansi Magic’s hit show Isibaya and her fashion line, Essie Apparel, has been featured in fashion bible Vogue Italia. But what everyone’s talking about right now is her landing a coveted part in Netflix’s highly anticipated new spy series, Queen Sono. “Like my character, I don’t conform to what society says,” Enhle tells DRUM.

“I’m a thinker and because I’m a thinker, I will often work more than what a woman apparently should.” She plays Nova, the spicy girlfriend of William (played by Khathu Ramabulana) who’s the therapist and childhood friend of the show’s lead character, Queen Sono (played by Pearl Thusi). The actress is thrilled about her part in the action-packed spy thriller, the global streaming service’s first African original series. The role couldn’t have come at a better time, says Enhle, who’s on a journey of truth and self-discovery.

“I’m so honest it scares me, and Nova took that element of me. I used that growth from myself in her. “She is very gutsy and ballsy, and she tells it like it is, of course, tell it like it is when it comes to what happened with her and Black Coffee (44).

The internationally renowned DJ told Mzansi he’d suggested they split via email. He told City Press newspaper he’d proposed “we should separate, and she should find a place to stay with the kids”.

According to him, they had “tried everything, such as a seeing a therapist and a life coach, but nothing worked”. Enhle (32) didn’t lash out at this revelation, however. In fact, the only time she’s made any reference to their personal life was when she spoke to DJ Zinhle about infidelity in her YouTube show, Sincerely Yours Enhle Mbali, and why she chose to stay married to him despite being hurt by his actions.

“I went through two cheating scandals: one was a s_x tape, one was just ratchetness,” Enhle said. “I remember in my pain, tears, strength and stillness, there was one day when I thought, ‘Why do I care so much? ‘Why do I want to listen to society say, ‘He’s cheated on you twice, leave?’ What is my heart saying? What is my spirit saying?’ “And my spirit said, ‘You love him, sit your ass down and do what is best for you and your family’.”

Her fans were furious at what Black Coffee had said to City Press. Many couldn’t believe he’d had the audacity to ask her and their two boys to move out of the home they’d built together. It didn’t matter that he had offered to pay for their new set-up.

“How fair is it to ask your wife and kids to leave their family home and go rent a place?” one social media user wrote on Twitter. “Imagine being evicted from your marital home with kids by someone who’s hardly in the country. Why didn’t he move out and find space alone?” another said. How is she dealing with life after marriage? Enhle still won’t be drawn into discussing their relationship, saying she wants to protect her children’s privacy. It’s not surprising – she’s always done everything in her power to protect them, including drowning out public opinion on her personal life. Her boys are still her highest priority, she tells DRUM. But juggling a thriving business, an acting career and doing the school run can be tough.

Luckily, Enhle has the unwavering support of her mother, Bongi Mlotshwa, who’s helping her find her feet as a single mom.

“Family is important – the kind of help you have in your house and everyone pulling together for you is extremely important,” she says. “There are days where I’m meant to finish on set at 1pm, but I have to pick the kids up at that time. Then I’ll pick the phone up and say, ‘Ma, can you do it for me?’ “She’s amazing, that woman. I don’t think she knows how amazing she is. And I tell her so often, but I think because I’m her daughter she doesn’t hear it and she needs to hear it more often. “She’s a cheerleader of note. Her heart is pure.”

Mom and daughter are clearly very close. After news of her separation spread last year, Bongi posted a gushing tribute to her daughter. “The lady next to me is a Soldier [sic],” she wrote alongside a picture of her and Enhle.

“Very brave intelligent human being. It’s amazing how you raised a woman and you end up admiring their Strength.” Thanks to the long line of strong women she comes from, Enhle knows she can face anything that comes her way. And if her social-media posts are anything to go by, she’s embracing her new status as a single woman. She’s been flaunting her flawless beauty on social media in a series of perfectly styled pictures. It’s all part of her plan to conquer the fashion world. Enhle has in fact been invited to a prestigious fashion week later this year.

“I don’t want to rush anything,” she says. “I want to get on the international stage and really blow them away.-Drum