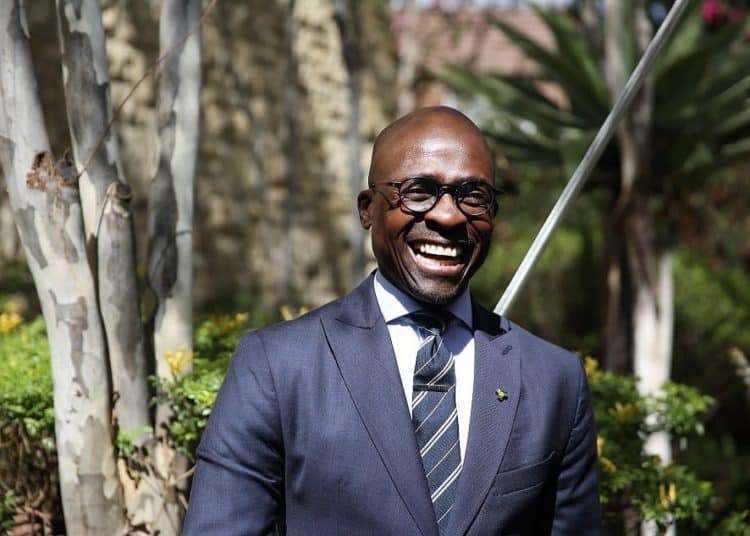 Malusi Gigaba has always been accused of having a roving eye but his wife Norma has stuck by him through all his s_x scandals. However it seems she is finally tired of his antics.

Earlier this week a video of the politician’s car is surfaced on social media. In the video a man is going around the car showing its damage after it had been keyed and vandalised.

After the news Gigaba’s first wife Thabong Nxumalo has gone onto her Instagram account to share what many believe to be a subliminal shot at her ex husband who divorced her after he cheated on her with his current wife.

She posted a picture of herself by the river side looking very happy but it’s the caption that had social media cackling at the irony. ” Karma has no menu. You get served what you deserve”

Tweeps took it to mean that Karma had come for Norma who allegedly wrecked Thabong’s marriage.

#Gigaba norma dated a married man, I still feel the pain of the first wife. She was also a side chick that got pregnant. Wakhipha umfazi emzini wakhe, I don’t feel any pain for her. Umuthi uyaphupha at some point. How do you expect a blessed marriage when you disrespect

Norma found Melusi inside a merriage and broke it off, then married him… Now her turn is over she must give others a CHANCE 😂#Gigaba pic.twitter.com/raLepv4TY5

The rumour mill also has it that the same woman Gigaba got involved in the sex scandal is still present in his life and is pregnant for the former Minister.

Buhle Mkhize in pictures to those who came yesterday on Twitter.Around 2017 she used to make Norma breath through the wound after confessing she's #Gigaba's side chick… pic.twitter.com/8BpYgHBP43

Advertisement
Related Topics:Malusi Gigaba
Up Next

PICS: Vuyolwethu Ngcukana Goes All Out To Surprise His Woman at Work