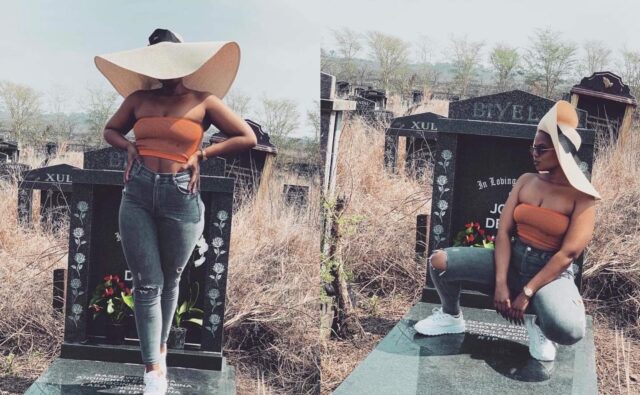 South African girl slays in a graveyard, took pictures while standing on top of a grave neatly decorated with tombstones.

Whether this was her relative’s tomb or not, she looked at ease standing and posing for photographs on the grave.

She revealed that the grave was actually her father’s grave and thanked her father for leaving her behind a whooping R1.5 million in funeral cover.

Twitter users claim that this slay queen never sheds a tear when her father passed away knowing she is going to be an instant millionaire. Here are some of the reactions:

1.5 Mill… I think i have a crush on u pic.twitter.com/9uZ6DdWQrS

We were meant to be together, like ANC and corruption 😍😍😍 pic.twitter.com/iCp7drqO0g