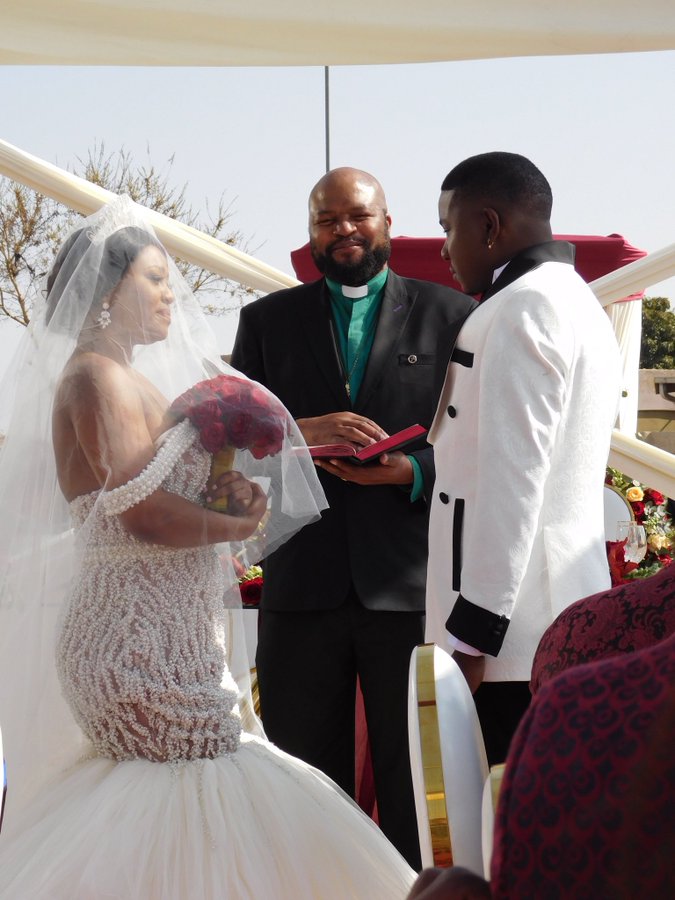 Rhythm City viewers were treated to a one-hour wedding special which saw Kasi couple Sabelo and Sindiswa tying the knot. The dashing bride was drenched in a gorgeous white ensemble and her brides maid’s wore maroon gowns. Her husband was joined by Fats and Bra kop as his groomsmen and together they served.

Shot in Orlando East, the wedding special aired on 15 October and viewers made the telenovela trend whilst manifesting a similar experience should they decide to wed.

The couple had a rough relationship however they overcame the obstacles and said their I Do’s. By rough we mean infidelity. Sindiswa found out that her husband-to-be slept with her friend Puleng, moments before the big day. She had already chosen Puleng as her maid of honour so the decision was not easy for her as this was someone she trusted.

Having forgiven Sabelo, she let go of the anger inside of her and decided to go on with the wedding. Here are some of the reactions.

Both weddings were just as Beautiful

But that was not the only celebration that Rhythm City would treat viewers to. Nandi and Khulekani’s vows renewal was also displayed and they too had gone through the most. Their son was shot and killed by an enemy David Genaro before Khulekani got his revenge. At their ceremony, musician Vusi Nova performed .

Catch @vusinova1 tonight as he sings at Khulekani and Nandi's vowel renewal, the most beautiful day in #RhythmCity history, tonight at 7PM pic.twitter.com/DFVczeopuo

Etv treated their loyal supporters to a huge display of love as their highly watched soapie Scandal! also had a couple saying their I Do’s. Simo and Grace Medupe also got married after much hesitation.

Rhythm City couple Puleng and Suffocate’s turn to wow us with their beautiful traditional wedding back in 2015. The romantic, not forgetting emotional ceremony, had many viewers yearning to also get married right on the spot!
Twitter was filled with many tweeps (especially the ladies), who began envisioning their own traditional wedding, thanks to these two.

It ended in tears because the couple has now separated, with Suffocates first wife behind bars.

Reneilwe and Suffocate’s son Mzi also tied the know in a traditional style wedding and Reneilwe looked beautiful as ever. Their marriage too was short lived as Mzi was undecided as to who he wants to be with. Then the whole pregnancy happened but as the saying goes, It ended in tears.

Advertisement
Related Topics:Rhythm City
Up Next