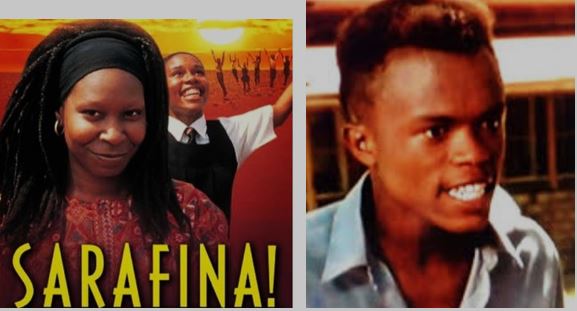 As South Africa celebrates Youth Day, one of the most iconic memories is the Sarafin a movie featuring veteran actress Leleti Khumalo. The award-winning actress has shared out on 16 June reflecting on ‘Sarafina’.

Leleti Khumalo has called for the same level of education for all schools including those in townships and suburbs – The veteran actress was speaking out reflecting on the 28 years since the release of hit Mzansi movie titled Sarafina – The star added that improvement since the apartheid era is minimal and called for free education for everyone Laleti Khumalo speaking out.

“The struggle will never end until we get the same level of education for all”: Veteran actress Leleti Khumalo believes so. The Sarafina star said the improvement in the struggle for equality in education has been minimal since the film was released in 1992. Most Mzansi peeps will be watching the film on Tuesday in commemorations of June 16, 1976. The narrative of the musical drama film centres on learners involved in the Soweto uprising in opposition to the implementation of Afrikaans as the language of instruction in schools and Bantu education. The Imbewu: The Seed actress told IOL that being part of such an iconic play was amazing because Sarafina was not just a South African story.

“It is very important to tell stories that people can relate to and stories that mean something to people. It was a given that Sarafina had to be this successful because it was talking about what was happening then. People can relate to the story, they went through it – they know exactly what the movie is about.” Leleti said that the country was still fighting for equal education back then and it would continue to be a battle until someone did something about it.

✨1 of my TOP 5 fav films… 'Sarafina'!! Another inspiration that made me become an actress…. The art and gift of telling a story and in turn changing and impacting lives forever #Sarafina #LeletiKhumalo #Whoppi #WhoppiGoldberg #favfilm #inspiration #beautiful #top5 #godisgood

“There is such a difference between education in the townships and in the suburbs. It is so different. We cannot have that, we are still fighting for equality.”

The River’s Lindiwe And Emma. . . The Real Why These 2 Hate Each Other