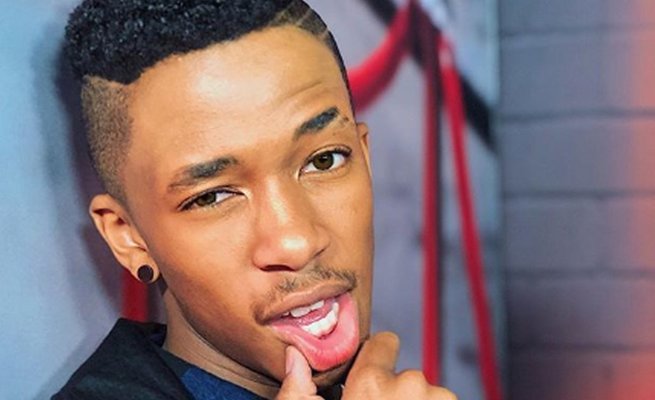 Lasizwe seems to have set his sight a new crush, and again tweeps have tried in their numbers to warn that the baby boy that this will end in tears. Like how it ended with “Skeem Saam” actor, Cedric Fourie.

For the past week if you have been following the reality star’s Instagram the baby boy let us in on who he is currently crushing. It started with Lasizwe using his Instagram stories to showcase that he is currently crushing hard on American rapper, DaBaby. Lasizwe has gone as far as downloading the rapper’s stories and sharing them on his stories. Moreover, he had been playing the rapper’s catalog like crazy.

His crush goes so deep that in his latest post, went as far as attempting to emulate the same style as his crush. Well, as much as he could. The post reveals Lasizwe accessorizing his sports-lux look with a two chain situation, in the style that has become synonymous with the DaBaby. Even in his story, he went as far as letting us know that that that was what inspired the look. And it seems that reception he got on Instagram gave him enough courage to venture in revealing his crush on Twitter.

On Twitter he posted images of himself on a quad bike. Lasizwe and his siblings has spent the day together quad biking sharing the experience through his Instagram stories. But the images he posted from the session were captioned with, “DaBaby’s future baby.” A bold statement that was intentionally meant to shake the table considering that when he posted he images on Instagram, the caption read, “John Vuli iGate.”

Suffice to say that tweeps swarmed the post to tell baby boy to stop with the dreams and focus on the attainable. One comment went as far as suggesting that the same man that Lasizwe is crushing on and giving some shine on his timeline does not like people that are part of the alphabet soup. Now, that cannot be proven, on the contrary, not say that he is but DaBaby has been embracing of his fans despite of their sexual orientations.

But Dababy is homophobic. pic.twitter.com/QlARcFYhLa

Hes not your type…look for your types please. Hes La liga, you are mvela pic.twitter.com/A0a0AFT1IM