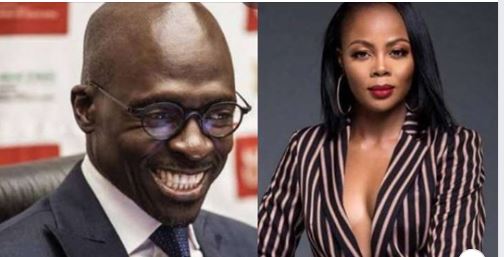 Malusi Gigaba was trending last night on twitter. When I saw the trend I thought Mr. ‘Imagine this on your mouth’ has done part 2, well the reason he was trending it is because he cheated on Norma.

Recently there was a video of Malusi’s car scratched all over with a key and it was alleged on the windows of the car it was written ‘cheater’, a lot of people suspected that Norma did that because it is written a woman all over it.

It is alleged that Malusi cheated on Norma and the side chick is pregnant with twins, Malusi and Norma have now deleted pictures of each other together on their social media accounts. Tweeps are out here already having names for the unborn twins. If their father is Gigabyte the twins will be Megabyte and Kilobyte. LOL.

So Norma was Malusi Gigaba

Advertisement
’s side check when Malusi was still married to his first wife, Norma fell pregnant and Gigaba divorced his first wife and promoted Norma. Tweeps are not feeling sorry for Norma because this is karma. She is losing her husband the way she got him.

Former South African Minister of Home Affairs Malusi Gigaba has cheated on his wife again and allegedly for the 4th time . It is said he is expecting twins from what South Africans call a side chick.#Ramaphosa #Gigaba #Norma pic.twitter.com/xfp7GVBfql

Tweeps are saying that the twins will be named Kilobyte and Megabyte. This Gigaba thing is bigger than we thought. It's a tough time for Norma🤞🏽 #Gigaba

Advertisement
Related Topics:Malusi Gigaba
Up Next

Sassa upgrades: This is how South Africans will get their Covid-19 grants