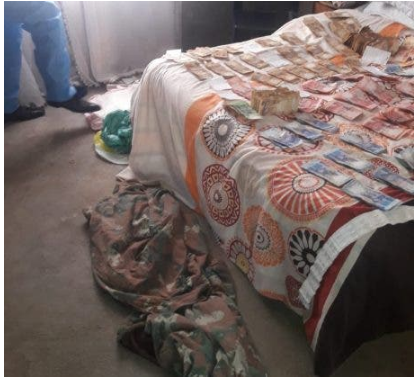 Two more suspects have been arrested for possession of large amounts of money believed to have been stolen during a CIT robbery that occurred in Burgersfort, Limpopo, late last month.

The Limpopo Tracing Team followed up on information provided by Crime Intelligence and went to a house in Metz, Ga-Sekororo, the home one of the outstanding alleged CIT robbers. The police did not find the suspect but upon searching the house, they recovered large amount of money, said the South African Police Service (SAPS) on Tuesday.

An elderly woman aged 61 and her 27-year-old son were arrested for possession of suspected stolen money and money laundering as they failed to explain who the cash belonged to.

The suspects will appear in Lenyenye Magistrate’s Court.

Six other suspects were arrested just two days after the robbery.

Police spokesperson Colonel Brenda Muridili said some of the money that was stolen during the robbery was recovered, as well as five unlicensed firearms with ammunition. Muridili said police also seized five vehicles.

“It is reported that just after 6:30 pm on Monday, an unknown number of suspects robbed security guards of an undisclosed amount of money after allegedly using explosives to bomb the armoured vehicle,” Muridili said.

“The team followed up on intelligence which led them to Polokwane, Mokopane and Lebowakgomo where six suspects were arrested at their hideouts.

“The police confiscated at the scenes, five vehicles, of which four are suspected to have been robbed from their owners while the fifth belongs to one of the suspects. Five unlicensed firearms and ammunition, as well as an undisclosed amount of money, were also seized,” Muridili said.