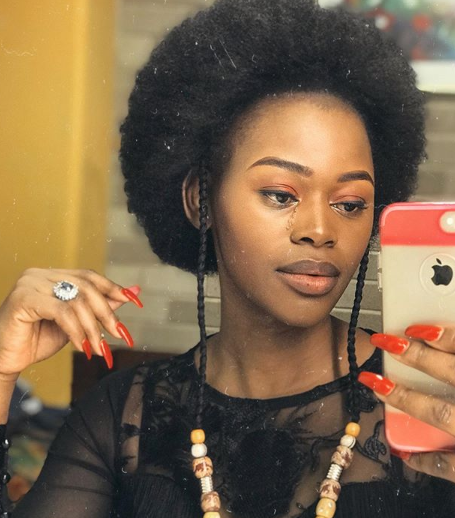 Azwimmbavhi has a birthmark that starts from the inner corner of her right eye to where her right nostril starts. She says this birthmark has disadvantaged her in the entertainment industry but she kept holding on to her dreams. “I’d get rejected for only one reason.

We like you but how do we cover that scar? The question was on the lips of each and every agent I met”, she said they would ask. The actress would respond, “’It’s just a birthmark,’ with an innocent smile.” Then they would say, “Your birthmark won’t get you any jobs, sorry we can’t take you.”

The beauty who is former Miss Thohoyandoe said it was difficult but she held on to her belief in God and prayed about what she was going through. She had a simple prayer she repeated, “Daddy you gave me a beautiful talent, please help me showcase it. And may your glory be seen.”

Azwimmbavhi added that being told no, she can’t get a part she auditioned for because of the scar on her face hurt and killed her inside. “To hear all this after years of drama school and performance training killed me iniside,” she said.

The actress is Venda, 30 years old and a mother of two. She is married to a businessman, Lucky Litelu who is the CEO of Local Green Economy Initiative. She is also a princess in Dzimauli Musanda Hu-Rambuda Tshiwangamatembele.

We might learn one or two lessons from her. I don’t know what might be holding you back Tea Squad or what excuse you have told yourself. But like Azwimmbavhi if you persevere you just might just achieve your dream.

Advertisement
Related Topics:Azwimmbavhi
Up Next