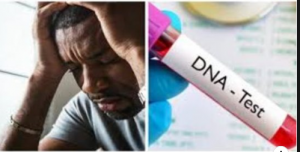 Paternity fraud: Man finds out he is not the father of his 4 kids

A Twitter user has shared the harrowing experience that his close friend recently suffered. According to him, the friend ran a DNA test and discovered that none of his four kids biologically belongs to him. The post generated mixed reactions from Nigerians on the social media platform.Paternity fraud

A Nigerian man identified as @gospeljosiah on the microblogging platform, Twitter, has gotten his followers talking after he briefly shared a harrowing experience that one of his close friends suffered. According to @gospeljosiah, the close friend in question had contacted him to share what he discovered after he ran a DNA test for his children.

I just got a call from a senior friend, he told me that the DNA results of his four beautiful Children are out they are… 3girls and a boy from the Embassy and NONE of the kids are his…🤦🏽🙆🏽‍♂️

Upon posting the tweet, @gospeljosiah’s followers flooded the comment section with mixed reactions to what he shared. Some of them offered comforting words for the man in question while others attempted to find out what could have led to the situation.

As sad as this is, my take remains that it takes more than a zygote to be a father. Fatherhood should be beyond sperm donation, children that call you father are yours. We should adopt that attitude too, although this is hard to bear, I admit.

Chai. I pity him. Well, he knows the type of woman he married and how they started. Paternity fraud is real.

Please call him from time to time o. Na this kain thing dey make person commit suicide or murder! Wgere does he even start from???

Something is mysteriously wrong somewhere. Four? Ó dín din mẹ́rin? He should try have a second test elsewhere for them again.