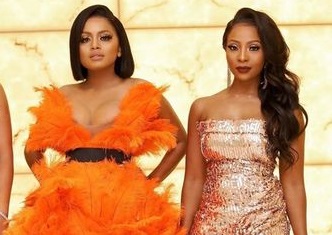 Lerato Kganyago has had to fight off trolls time and time again who poke fun at her failed marriage with ex Thami Ndala.

This time she had Pearl Modiadie in her corner to fight off trolls warning them to stay in their lanes and mind their own business.

This comes after trolls brought that whole discussion on LKG’s private life to her timeline.

Pearl was gushing about how her partner had quit smoking due to the cigarette and tobacco ban in the country because of lockdown.

“The cigarette ban actually made my boyfriend quit smoking! He’s got zero cravings & says he doesn’t miss it,” she wrote.

A troll told Pearl not to keep her boyfriend hidden and just show him off otherwise she will end up like LKG.

The radio personality who is an expecting mother was not about to let another woman get dragged and she came to her defense by saying; “And it has nothing to do with you! Don’t bring other people down on my timeline and comments section! This is a positive space.”

Lerato Kganyago also gave a stinging clap back that left her followers in stitches.

Video: Zodwa shows men how to last an hour in one round