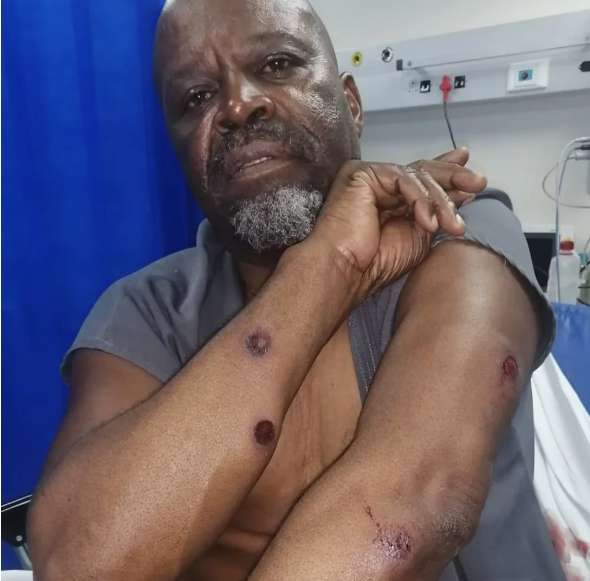 ACTOR Patrick Shai said all he was trying to do was to be the voice of reason at protests in Dobsonville, Soweto.

And so, he stepped in to calm down the situation between cops and protesting residents who were frustrated over electricity cuts. But instead of giving him an ear, the legendary actor was shot 11 times with rubber bullets!

The incident happened as gatvol residents in Dobsonville in Soweto protested over power cuts in the area.

“I was not even part of the service delivery protest in my area. I was actually trying to calm the situation between the police and the angry crowd,” he said.

However, he then heard police say they wanted to show people who they were.

“I asked them to calm down because that’s not how public policing is done. They suddenly rushed to their cars and took their guns. Like mad dogs they started shooting in my direction.

“In that moment as they were shooting, I saw and felt the pain Andries Tatane must have gone through. I saw the pain of those men in Marikana, who were brutally mowed down,” said Patrick.

He said Mzansi didn’t have a police force, but a force of wild dogs who go out to shoot as if they were at target practice.

“We have a bunch of hooligans who are masquerading as police. They had no intention whatsoever to disperse or arrest the people. All they were interested in was shooting at us. Rubber bullets are not popcorn. The pain I am now going through is unbearable,” he said.

Patrick said it was useless to report the matter to cops as it would be like reporting a wolf to another wolf.

He said: “Andries Tatane was not as lucky as I am. He died. It could have happened to me.” He said

“Police used rubber bullets to disperse a group of about 200 protesters who had allegedly started pelting objects at the police while the JMPD were clearing the debris on the barricaded Elias Motswaledi Road.”

She said no one has been arrested.

Peters said the situation is calm at present and the road has been cleared for easy flow of traffic.

“Police will maintain a presence in the area to ensure that no further violence erupts.”

“A member of the public who may have sustained injuries when bullets were fired at protesters who became violent, is encouraged to report to the police. Station Management can be contacted if necessary,” she added.

Kelly Khumalo speaks on Senzo Meyiwa’s death: Lock me away and throw away the key

‘I know who is responsible for my accident’ – Sbahle Mpisane