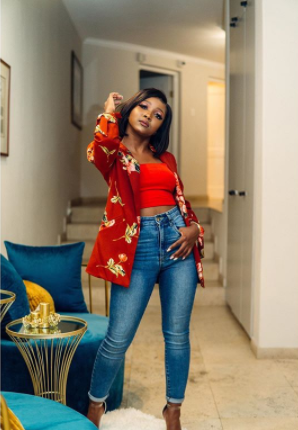 Nomvelo Makhanya’s recent images shared on social media has made her followers’ on twitter jaws drop ,it shows that the actress was on a vacation as she posed in a VERY revealing yellow bikini made by BikiniNThingz that was only covering the nipples.

The Scandal actress and a Singer born on April 24, 1996, in South Africa. She started in sports and was doing well until her mother suggested her to try out the NSA (National School of the Arts) in Braamfontein, Johannesburg. … Apart from acting, Nomvelo also loves singing.

The boob and n_ked police caused for the media personality to trend on social media , with trolls and thirsty tweeps coming out of the wood works to comment on her appearance but she didnt mind and she  wrote, “Living my best life”.

Advertisement
Related Topics:nomvelo makhanya
Up Next

Gomora: Between Gladys And Pretty – Who Is More Annoying?