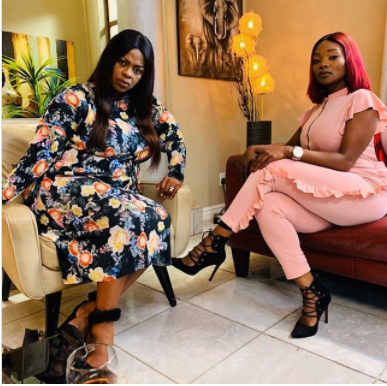 The beautiful and talented Nompilo Maphumulo who plays the role of Nosipho on SABC 1’s hit telenovela Uzalo. On the show, Nosipho’s character is the daughter of Dawn Thandeka King’s character MaNgcobo.

However, fans of the SABC1 show which boasts over 9 million viewers will be shocked to learn that despite playing the roles of mother and daughter on the show, in real life, MaNgcobo and Nosipho have an age difference of less than 5 years.

Dawn Thandeke King was born on October 1, 1977, which means she is currently 42 years old, although she will be 43 in roughly two weeks from now.

Nompilo, on the other hand, was born on May 3, 1982, which means she is 38 years old. In a funny coincidence, Nompilo was born in KwaMashu, which is the setting for Uzalo.

The vivacious Nompilo looks much younger than she is and many people often mistake her for someone who is in her mid to late twenties. This has served her well, as this has allowed the actress to play roles of much younger people, like that of Nosipho on Uzalo.

Nompilo has also had the misfortune of being targeted by fake news peddlers. Just a few months ago, she revealed that she was ‘freaked out’ by a fake letter which was addressed to President Cyril Ramaphosa which purported to have been written by her.

Nomplio quickly issued a public statement distancing herself from the fake letter and called on the law to deal with the miscreants behind the article.