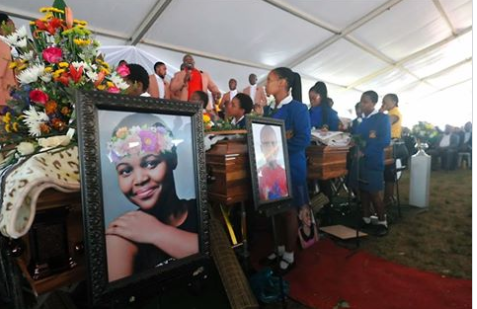 TEARS rolled down the faces of hundreds of mourners at the funeral Saturday of the four kids allegedly killed by their dad.

Their dad, Sbusiso Mpungose (44), appeared in the Pinetown Magistrates Court on Friday. He abandoned his bail application and the case was postponed to 9 October.

The kids’ aunt, Sne Mlawuzi, said: “The loss is too painful; it’s immeasurable. We don’t know how we’re going to get through this.”

The kids’ mum, Xoli Mpungose, wrote them an emotional letter in which she said she was sorry for the pain they felt as they were being killed.

Advertisement
by her eldest sister, Mthobisi Mlambo, the letter read in part: “My angels, I’m sorry I couldn’t save you. Mommy misses you already. I love you so much. Please forgive me.”

“Ayakha didn’t deserve to die so painfully. She was a bubbly girl who had a warm heart,” said Aphethuxolo.

She said on the day of the incident Ayakha intimated she wasn’t feeling safe.

“In fact, she had been telling us for a while that she didn’t like living in her home anymore,” said Aphethuxolo.

Natasha Conabeer dies hours after she is found