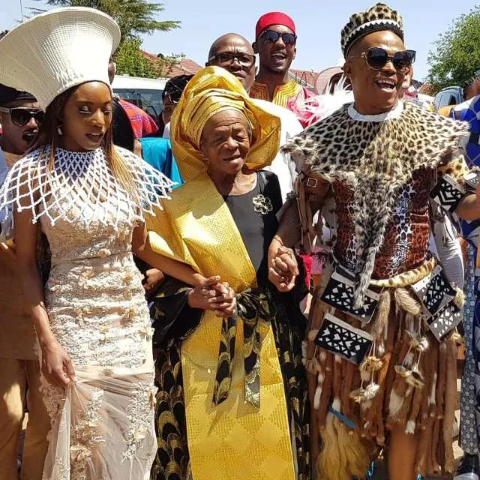 Mam’ Mary died on Saturday at Netcare Park Lane Private Hospital around 11am.

Somizi confirmed the death of his mother on social media, expressing his overwhelming sadness that his mother died on his late father’s birthday.

“My mom lived to the fullest … achieved beyond her dreams … it hurts like hell … I won’t lie … a day without her calling to either say I love u or give me money,” Somizi said in his caption.

Somizi also thanked the country for the lifelong love and support they showed his mother and his talented family as a whole throughout the years.

“Thank u SA for loving the phenomenal superstar that is my mother … she left us peacefully about 11am at Parklane private hospital as I was on my way to drop off her gown and a few minutes earlier the doctor called to say come she’s up and jolly now … I arrived a few mon late… Lala ma..”

Today's my late father's birthday…..and my mom decided to respond to his call to join him in heaven…..THE TREE HAS FALLEN… I'm shattered to the core…..but I'd be very selfish if I dont release her….my mom lived to the fullest….achieved beyond her dreams….its hurts like hell…..I wont lie…..a day without her calling to either say I love u or give me money…….thank u south africa for loving the phenomenal super star that is my mother…….she left us peacefully around 11am at parklane pvt hospital as I was on my way to drop off her gown and a few minutes earlier the dr called to say come shes up and jolly now…..I arrived a few mon late……LALA MA……

Advertisement
Related Topics:somgagaSomizi
Up Next

PICS: Blue Mbombo And Lorna Maseko Are The Celebrity Friendship We Didn’t Know We Needed