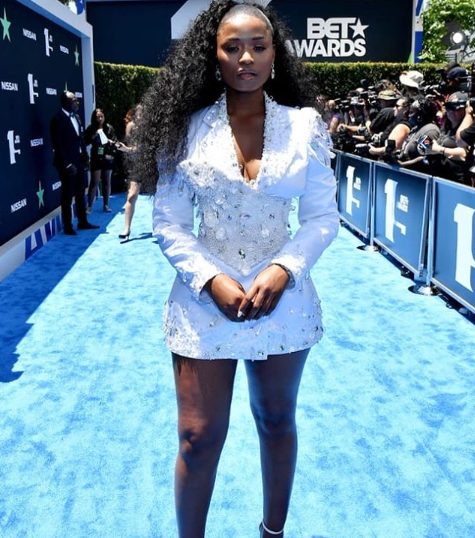 TV presenter and actress Nomalanga Shozi has been going through the most this week. The month of June started on a massive low for the actress who got involved in a car accident due to drunken driving.

It has only been only 6 days since alcohol sales were unbanned during the lockdown and people are already getting drunk behind the wheel. One such drunken driver smashed into Nomalanga’s brand new car.

The actress took to Twitter to explain her misfortune. Apparently she was driving at night and noticed that a driver on the same road was driving unsteadily.

“I realize that this man is not swinging his steering wheel but is instead coming straight at me. By the time I realize what’s happening, I’m too late to reverse, so I accelerate in hopes to pass him. He crashes right into my door.

In a video she took on that night she can be heard asking the man who slammed into her car to go and inspect the damage he had done. The man can be heard telling her to call the police and walks away.

I get out, screaming. Thank God I’m not hurt, but my Benz? My brand new Benzo Baby? F_cked. I get closer and realize these two men are EXTREMELY DRUNK”

Drunken Driver Crashed into me last night (The Thread):

There I was driving to my destination when I approach a T-junction with a dead-end to the right. The emerges from the dead-end, trying to get back onto the main road as they are obviously lost.

She narrates that the men appear unrepentant and start insulting her and eventually the police get there and the alleged driver claims he didn’t do anything wrong. The actress concludes that there was nothing she could do because the car had been hired.

His friend starts speaking to me in Zulu, thinking I’ll calm down. I didn’t. pic.twitter.com/kfQsB8iEOZ

Advertisement
Related Topics:Nomalanga Shozi
Up Next

Pearl Modiadie And Her Baby Daddy Are Over The Moon!

Video: DJ Tira’s son & their Neighbour fighting on the street, the old man calls Him a low life criminal