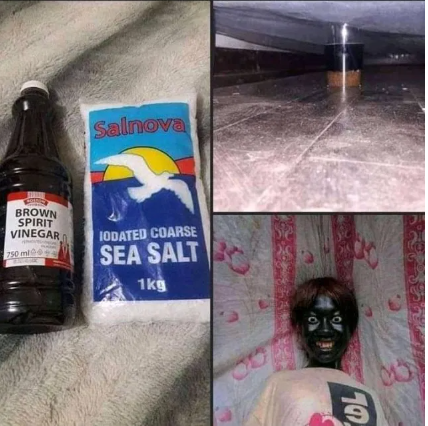 One tweep says, “Put more salt until you see yourself.”

Another was wondering, “So all the shareholders of this record label slept in one bed last night…”

People from all walks of like who felt they had scores to settle with those attacking them in the spiritual realm tried it out. It is said though that if you are not strong spiritually you might fail to wake up from your sleep.

Here are some of the testimonies from the #BrownVinegarAndSaltTestimony. Many of them were just hilarious.

So the_funnychef tried our the salt and vinegar thing and this is what she had to say…. 🤭 😂

The salt mixture is real and dangerous guys🥺 I woke up blind 😭 #BrownVinegarAndSaltTestimony pic.twitter.com/MnVlrBAjjQ

I am not okay bahlali I'm still traumatized my whole body is so damn cold what I saw this morning at around 2h20 was so damn scary and crippy 😭😭😭😭, I'll be sharing my testimony very soon….. I still need to gather some strength #BrownVinegarAndSaltTestimony pic.twitter.com/NoYiBJrYM3