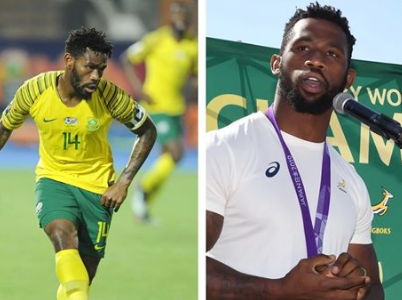 Both Hlatshwayo and Kolisi have the mammoth task of carrying the nation’s hopes on their shoulders.

In the last two weeks, Kolisi was the most photographed man in the country after leading the Boks to the 2019 Rugby World Cup glory in Japan.

His story continues to inspire young South Africans from the impoverished communities that if you dream and reach for your goals, the sky is the limit.

As for the Bafana skipper, “Tyson” has the most difficult task of bringing back the glory days of the SA Seniour Men’s team. Winning major soccer tournaments is significantly difficult compared to rugby, where only a few countries take part.

For instance there are 54 countries in the African continent, so with the numbers, the challenge is always more harder for football-loving countries.

But nonetheless, the two tough-as-teak sports stars have such a striking resemblance they could easily mistaken for siblings. Their game too has similarities – it’s characterized by brawn, brute and dedication, and that is why they have went so far and achieved so much.

Good luck to Hlatshwayo who will be leading SA in the 2021 Afcon qualifiers this week against Ghana and Sao Tome while Kolisi will most probably take a much-deserved rest and holiday after a grueling tournament and trophy parade tour.