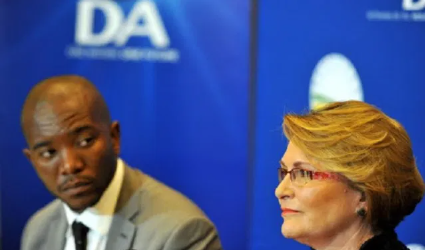 It’s no secret that Mmusi Maimane and Helen Zille are not the best of friends, especially since his exit the two have not seen eye to eye.

Mmusi on Saturday, June 6 celebrated his 40th birthday and whilst many on social media took time to wish the former politician a happy birthday on the Twitter and other social media platforms.

Well, it seems that not everyone was in the mood to wish Mmusi a happy 40th and instead he had shade thrown his way.

Mmusi has been lobbying strongly for schools not to reopen on June 8 and only when they are completely safe he has even taken his fight to the courts but has been unsuccessful in his plight.

Very toxic behavior I must say.

You waited for my birthday to cast shade. Wena mara. pic.twitter.com/fjsuB4RjVu

Mmusi responded to Helen’s tweet by letting her know he caught the shade she threw on his birthday.

“People who wait for your birthday to cast shade or to say negative things,” tweeted Mmusi

People who wait for your birthday to cast shade or to say negative things🤦🏾‍♂️.

Let’s be clear we fought to make sure schools are safe to reopen. That was the correct fight. There must be water, working toilets and clean and safe classrooms.

That is in fact responsible parenting https://t.co/I3Df2ZXety

Helen’s shade was picked up by several people on the timeline, with many letting Helen know that she was wrong for her post and ever since Mmusi left the party he has gained a lot of fans.

I find Mmusi interesting now that he is himself pic.twitter.com/KpwfG6VdhB

Helen Zille waited until Mmusi Maimanes’ birthday to slam him for his work on safe schools. It was petty & spiteful – and further proves why he is better off out of that party. 🇿🇦 https://t.co/fsxrw7KK9i

South Africa’s state of disaster will end on 15 June