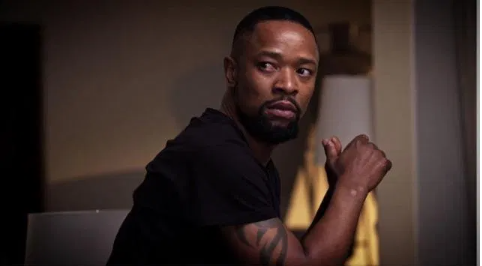 Sometimes the fame that comes with being a public figure is huge and fans sometimes forget that their favorite celebrities are also human. The Queen’s Shaka, played by SK Khoza had an episode with a fan at a restaurant that is received mixed reaction on social media. While being served at a restaurant, the waitress started asking SK Khoza about Shaka and ultimately messed up his order. This did not go down well with SK Khoza who went on a tirade on Twitter of how he does not want to be asked about Shaka in public.

SK Khoza must be regretting taking to Twitter to air his disappointment over a fan who asked him about his onscreen character, Shaka while he ordered food. The actor who acts as Shaka on The Queen did not take kindly to the question and said people should respect him when they see him in public and should not ask him about Shaka.

It goes without saying that he is one of the most loved actors on TV at the moment. Just the other day, SK Khoza, was searching for the fan who started the petition to get him back on The Queen.

Sometimes though, the love, can be a bit too much. Some stars can’t even go to the mall, because they simply won’t get anything done. In the case of SK, he almost went home hungry after being serviced by a fan at a food outlet. The award winning actor who plays Shaka on Mzansi Magic hit telenovela, The Queen, was attended to by a star struck fan, who wanted nothing but the juice about Shaka.

This did not end well, as SK received a wrong order. The experience lift him livid, and he took to Twitter to vent.

“Nothing makes me mad like people who focus on asking me questions about Shaka while I order food and when the food gets to me, they did the total opposite of what I asked. Hayi maan respect your damn customers…,” SK said.

Nothing makes me mad like people who focus on asking me questions about Shaka while I order food and when the food gets to me, they did the total opposite of what I asked. Hayi maan respect your damn customers…

Although, some people felt for SK, others are of the idea that he should always avail himself to his fans. Some even went to the extend of mentioning that his fans are the ones who helped bring him to The Queen, so he is kind of indebted to them.

Wenja, Nja 🤔 you forgot the same people made petition for you to come back,, nga zonya

They are excited cos they signed the petition to bring u back to that character. If it wasn't us u would shakaless so please be kind to your fans.Hayi maaan respect your damn fans…

Advertisement
Related Topics:SK KHOZA
Up Next