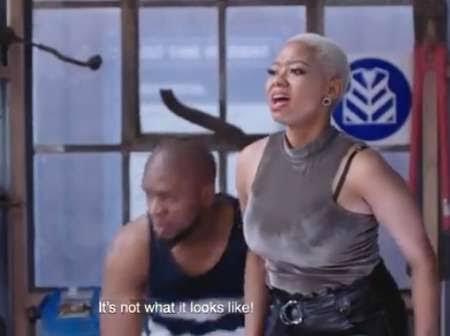 Tumi’s affair with Mabutho has had social media buzzing for the past four weeks. I knew that she and Lindani were not compatible with the moment they said “I do” but I never imagined she’d cheat on her husband. Her own mother; Lindiwe Dikana has never cheated on her husband throughout their marriage, not even when they were no longer married.

To be fair, Tumi married too quickly after her divorce with Zolani. In fact, divorcing Zolani was probably her biggest mistake. Zolani is the perfect guy for Tumi; she was herself when she was married to him, she was ambitious and so smitten that she never had time to look at other men.

Lindani is no longer in Tumi’s league since Tumi’s mother is the wealthiest woman in the soapie and since Tumi’s had the taste of the good life.

The only reason she’s cheating with Mabutho is that she can’t have Zolani because they’re related and she’s bored. Mabutho may seem like he’s genuinely in love with her, but he’s not.

Mabutho shares the same passions and visions as Tumi but they’re not a good match. He wants to upgrade his life through Tumi and he’s willing to do whatever it takes to win. He doesn’t care about Tumi or even Lindani because he’s aiming at a bigger prize; Lindiwe’s money.

The end of this affair will spell disaster in The River for Mabutho and Tumi, because Tumi is falling-in-love with Mabutho and Mabutho, is in-love with her money. The fact that they’re not even using protection tells me that he’s willing to impregnate her so he can trap her forever.

Lindiwe will never accept Mabutho as Tumi’s baby-daddy, Tumi side-guy, or Tumi’s boyfriend, should she divorce Lindani because Lindani and Mabutho have the same social status. Should Mabutho try to blackmail either Tumi or Lindiwe when she tries to end the relationship, Lindiwe might order a hit on Mabutho. He’ll blackmail Lindiwe to get money from her because Mabutho saw Tumi killing Mbali (Tumi’s sister). He kept quiet about it to use it as leverage…

Lindiwe will advise Tumi to terminate should she fall pregnant with Mabutho’s baby.