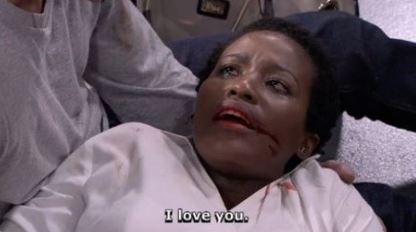 Fans of prime eTv hit show Scandal where left heartbreaking and in somber mode after another thrilling episode. eTV has been dishing out Oscar-winning worthy episodes daily since the tiff between Mthunzi and Thembeka got to boiling point.

Fans will remember how last week Thembeka and Romeo seemed to have defeated Mthunzi. However, after promising blood will be spilled, it appears as if Mthunzi has lived up to his promise and Thembeka from Scandal has died, if the last episode is anything to believe.

After a teen’s week which showed Thembeka finally confessing her undying love for Quinton, the drama reached the tipping point when Thembeka and Mthunzi fought over a gun and a shot rang out which ended up with Thembeka lying down with blood in her hands.

A shocked Mthunzi, after realizing the depth of his problems, fled the scene, eTV Scandal fans were left wondering if Thembeka had just taken her last breath on the popular show. Soon after the show aired, Thembeka took to Twitter and thanked her fans for the heartwarming love that they gave and showed her as she bid farewell to Scandal. Many people were left wondering why Thembeka was killed off from the show.

Friend she’s really gone . Dead dead! Won’t be coming back as a ghost ( they didn’t teach me how to act a ghost at Wits) let’s leave her be now . Let’s allow me an opportunity to play other amazing wonderful things or be a mom or be something other than her . It’s ok #etvScandal pic.twitter.com/1NNJa841ID