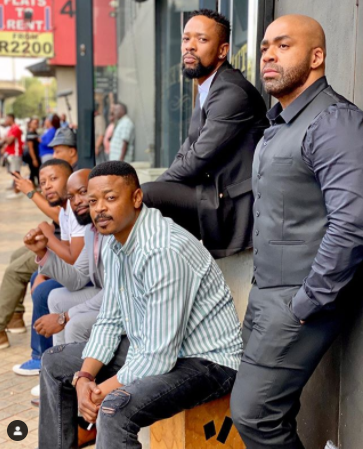 Here are the top 10 Best South African actors in no particular order:

Siyabonga Thwala is a seasoned South African actor who started his career in 1989. With over 31 years of acting experience, he rose to fame through his role in Generations whereby he played Paul Moroka. He further elevated his career through his effortless acting skills as Busani in Muvhango, DH Rabede in Rhythm City, and finally broke massive strides in Isibaya whereby he plays the role of Mpiyakhe Zungu a taxi boss, and is arguably the best acting gig of his entire career thus far.

Here are his main tv roles that made him a household name:

Leleti Khumalo is a powerful global actress well known for her role in headline movies such as Sarafina, Invictus, Hotel Rwanda and Yesterday. She started her professional career in 1988 and has 32 years of acting experience.

Here is a list of movies and soapies she starred in:

Jamie Bartlett will forever be known as David Genaro due to his exceptional embodiment of the role in Rhythm City. He kick started his acting career in 1987 but got his big break when he started acting in Rhythm City as David Genaro such that tears rolled out from fans eyes when he decided to leave the soapie.

Here is a list of movies and soapies he starred in:

Sindi Dlathu is a South African actress who has taken the standard of entertainment to new heights. She broke strides in her famous role as Thandaza in Muvhango whereby she portrayed a powerful and unmoved business woman. She started her acting career in small screen movies from 1997 and has continuously elevated her skills from there.

Here is a list of soapies she starred in:

Rapulana Seiphemo is one of the most well-known faces on South African television sets. From award winning films like Tsotsi, Rapulana proved irreplaceable as seen also in his role as Tau Mogale surviving from Generations to Generations The Legacy because of his firm nature. With over 31 years of acting experience, Rapulana has made a mark in the entertainment industry and continuously tries to empower young actors to achieve excellence.

The beautiful actress, radio DJ and television personality, Katlego Danke is one of the best actors in the industry. She kick started her career in 2002 and was made famous by her role as Dineo Mashaba on Generations, Katlego continued gaining fame and popularity in further roles in Isidingo and Gomora.

Here is a list of the soapies she starred in: Gomora, Isidingo, Generations, Beyond the veil, Miss Tertiary feel, The town that was mad, 7 De Laan.

Sello Maake Ka-Ncube is arguably the most experienced actor in South Africa. With numerous awards to his name, Sello started acting at age 25 in 1985. He had one of the major roles in Generations as Archy. He now spends time coaching aspiring actors as a way to give back to the community.

Here is a list of TV roles he starred in: Generations, Scandal, The Queen, The Herd, Rockville, The River.

Connie Ferguson is a living legend in the entertainment industry. She made a name for herself and is well known for building an empire out of her acting career. She became famous in her role as Karabo Moroka in Generations and went on to co-star with her husband in a hit soapie, The Queen.

Menzi Ngubane is a renowned actor who first graced the screens in 1987. He is also one of the stars who gained momentum through Generations whereby he played the role of Sibusiso Dlomo.

Here are a list of TV roles he starred in: Kwa Khala Nyonini, Yizo Yizo, Ashes to Ashes, Gold diggers

Isibaya, How to steal 2 million, Generations

Moshidi Motshegwa is another season actor to grace the screens. She started acting in 1997 and first made headlines through her role in Rhythm City and has made a mark in the industry as she is believed to be one of the easiest actors to work with.

Here is a list of TV roles she starred in: Zero Tolerance, Rhythm City, The River, Mandela & De Klerk

Advertisement
Related Topics:celebs
Up Next

Nicki Minaj confirms she welcomed a baby boy: ‘I’m in love with my son

Sjava got brows raised after posting a photo of a lady on social media, new girlfriend?