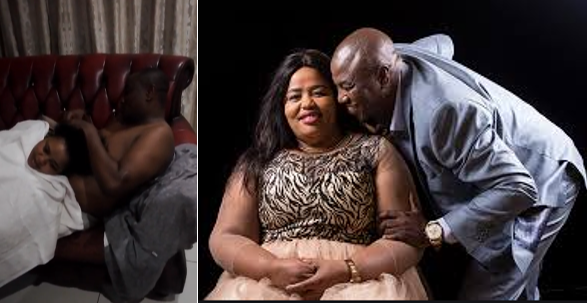 Advertisement
is indeed a loving and caring husband considering that he has to equally love and care for his four different wives.

His first wife, one Macele Mseleku is a silent lady and is described by her husband as a woman of few words. He, however, goes ahead to say that she is open and speaks about her feelings when there is something to point out. She also says when she likes or dislikes something.

A video has gone viral on social media where Musa Mseleku can be seen sleeping half naked on a couch with his first wife MaCele.

The two seem to be having a good time with MaCele laying on Musa Mseleku’s belly whilst he styles her hair.

Mseleku could be heard laughing saying this was a Christmas present for MaCele. He also mocked her and said she could have called the salon instead of abusing him.

Advertisement
Related Topics:MaCeleMusa Mseleku
Up Next

Uyajola 9/9 had another fire episode for viewers last night