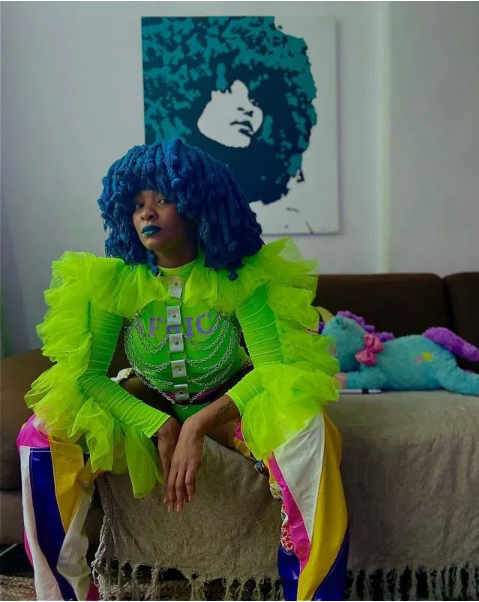 The #JohnVuliGate challenge has taken the country by storm this week. More recently, we’ve seen the cast of Skeem Saam as well rapper Nadia Nakai take on the viral challenge and now the outspoken Moonchild has also joined the challenge.

The blue-headed diva responded to a mean meme which reads,”Uthe ngkhiphe isfonyo, ngakhiph iPanty (You said I must take out my face mask, but I took out my underwear)”

She defended herself by pulling out the ‘your mama’ clapback and also included the tweeps sister.

That was not all, she even added, “Coz ur mama taking off her panties without ask(ing) and u pulled up! It’s y’all had a talk about why she never swallowed you up.”

Moonchild soon trended for her fiery responses but some people are not happy with the way she chose to address the troll, calling her out on the involvement of his female family members.

Defending herself from tweeps who said, “This is weak clap back indeed you could have insulted him not other people but then again our gender find it easier to fight men through ladies nje. We have a long way to go shem,” and another who commented, “Bru their was no need for her to insult his mother and sisters it’s the guy who insulted her not his family,” Moonchild responded by saying she is also a mother and a sister, so she does not get their

This is not the first time tweeps have come at Moonchild side-ways. In response to a tweep who requested for her “nudes”, she asked him to ask them from his mother. Whilst some applauded her for telling the alleged pervert, some laughed at her blunder as the follower corrected her by saying he was rather asking for her EP titled Nudes.

Perhaps the reason for mocking Moonchild comes from the reason that she is a self proclaimed nudist after she publicly declared that she hates clothes and will post her naked body whenever she wants to. After being called out for always dressing provocatively, Moonchild told a few tweeps that she will post her bums till people stop the whole act of being shocked.

“Also …I’ll post my bum until u stop being shocked coz … it’s my comfort! I love no clothes so deal with it!”

This also stems from the fact that growing up she was mocked for having a big butt and how she has grown to embrace it. If she is not starting twerk-trends for women on social media, she is encouraging them to accept their bodies the way they were created.

Advertisement
Related Topics:MOONCHILD
Up Next

Meet Zodwa’s new mkhulu bae: “I love him so much”