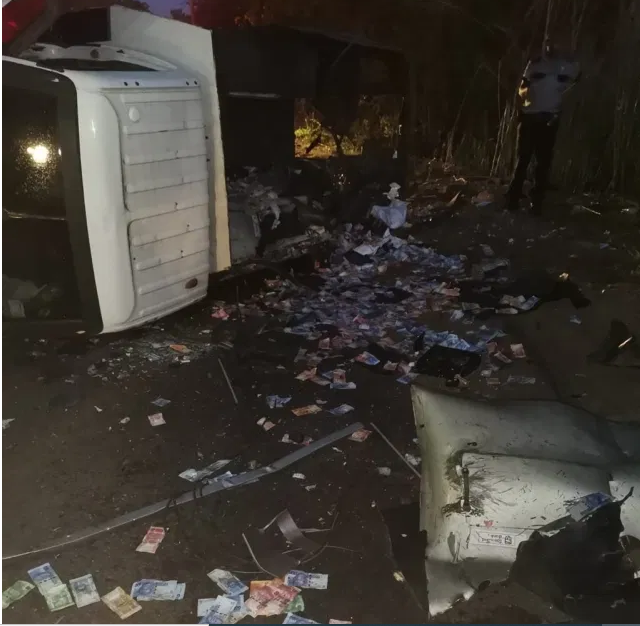 Five members from Rustenburg Flying Squad and the K9 Unit as well as two Fidelity security guards are being treated in hospital for gunshot wounds following a botched cash-in-transit robbery in North West, Rustenburg which left one suspect fatally wounded.

Members of Fidelity were transporting money when they were attacked, shot at, and forced off the road.

The suspects then blew the Fidelity vehicle with explosives to access the cash.

The suspects took cash from the vehicle, then burnt the vehicle that they used to block the Fidelity vehicle and drove off.

Police were notified of the crime and rushed to the crime scene.

The suspects were then cornered at Tlhabane/Lefaragatlhe intersection where a shoot-out ensued between the suspects and the members.

All members are currently admitted at Ferncrest Hospital.

The suspects managed to escape arrest but their vehicles were later found at different crime scenes around Tlhabane.

One suspect was found dead inside a Mercedes with a gunshot wound on the head.

Ten rifle magazines, explosives, and cash were also found inside the vehicle. The deceased has not been identified yet.

The national commissioner of SAPS, General Khehla Sitole, has commended the members’ bravery and wished the injured members a speedy recovery.

“We are appealing to anyone with information that can lead to the arrest of the suspects to call Crime Stop on 08600 10111 or to send tip-offs on the MySAPS App,” said Sitole.

If You See A Mzansi Girl With Legs Like This, This Is What It Means

If you have this “tiny hole” above your ear, See what it means