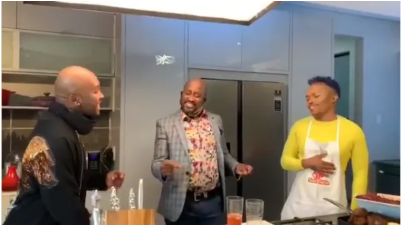 Vusi Nova is currently one of the leading afro-soul musicians in South Africa. Ringo Madlingozi held down the crown for the better part of the 1990’s and early 2000’s. And Somizi has dabbled in music, but he has other strengths, therefore imagine collaboration between them!

Well, Somizi already provided his followers with a sample of what that might sound like on Instagram. The Woo Shem personality is currently shooting for his upcoming cooking show and the latest A-Listers he invited to his kitchen were the leading male vocalists.

Somizi then posted on Instagram a video of the three of them harmonizing, and it is safe to say that the harmonies left many in comments section asking for collaboration

Yesterday's shoot was so much fun in my kitchen…..with my soul brothers….@vusinova1 @ringomadlingozi Vusi taught us part of the chorus from his duet with @dumi_mkokstadsa soon to be released……uyabona wena dumi I told u to feature me wangiziba……

We thinking maybe they should drop a track already. What’s your take on that.

Advertisement
Related Topics:Somizi
Up Next

Master KG Explains Why He Is Not Marrying Makhadzi