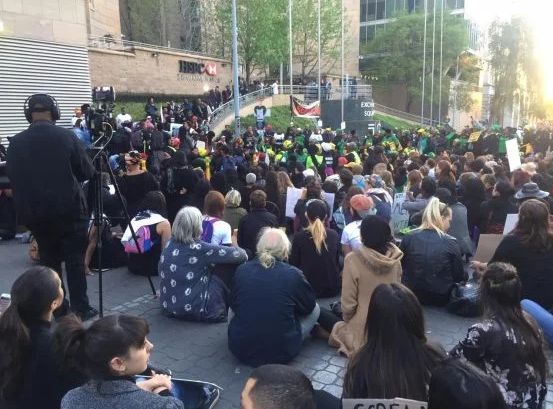 Hundreds already began to gather in awareness of gender-based violence and femicide in South Africa.

Following the brutal rape and murder of University of Cape Town student Uyinene Mrwetyana (19), who was killed by a 42-year-old post office worker, a “coalition” of 70 civil society activist groups, including Rise Up Against Gender-Based Violence and Sonke Gender Justice, under the hashtag, #SandtonShutdown gathered in Sandton from as early as 3am on Friday.

Advertisement
ANC Womens League is present at the march when they are the ones that got us here in the first place. #SandtonShutdown #AmINext #PayPatriarchyTax pic.twitter.com/rMXU8OUcnA

Sandton Chronicle journalist Chante Ho Hip said that the JMPD was present at every traffic light on William Nicol Drive in Sandton.

According to a statement released by the City of Johannesburg, the organised protest is led by various organisations and civil society.