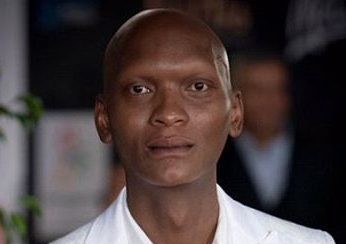 About a month ago Warren Masemola revealed that he and his wife were expecting their first baby.

At the time he took to Twitter to share the good news with a short but sweet caption in the form of a bible verse. “For this child I prayed and the lord has granted the desires of my hear. 1 Samuel 1:27.”

It seems it’s no time to reveal the baby’s gender and in doing that he enlisted the services of renounced artist Nelson Makamo and did the reveal through a painting.

The painted which he share on Instagram is of what looks like a boy and blue is the dominant color of the painting. Y’all know what the color blue means right?

The caption was as short as the baby announcement but conveyed the intended message. “gender reveal by @nelsonmakamo 🎭”

Another celeb who recently shared her baby’s gender is actress Zenande Mfenyane. In the most casual way she tweeted the following: “I thought I would have cut my hair by now, but I figured my daughter picked me like this when she was choosing her Mama, so the locks stay. I don’t want her to give me the side eye when she meets me for the first time”

Advertisement
Related Topics:Warren Masemola Reveals His Baby's Gender
Up Next

Fans Go Wild As Shaka Khoza Returns To The Queen