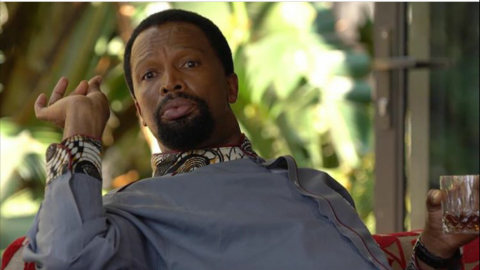 The Queen fans might be in for a treat as one of the show’s beloved characters, is set to return.

There are reports that Kgosi will return at just the right time when the Khozas are way in over their heads with problems, in their drug business.

Kgosi, played by veteran actor Sello Maake ka Ncube, is reported to be returning to the show as an influencing force.

Fans were devasted when the actor left the show and for a while his return didn’t look like it was going to happen.

At the time he said

“I don’t know when I’m going to come back to The Queen, you can ask the Fergusons about that because they’ll have better knowledge of my return.”.

Now if seems we are might just see Kgosi again.

The Khozas have been struggling with the drug business, since their new rival Sebata took over all their buyers.

Harriet has charged the boys to find out who is the new supplier crippling their business.

As they struggle to close in on their rivals, Kgosi will return from Brazil to save his sister.

Kgosi will reveal that he has been a drug lord in Brazil and will give Harriet his Brazilian contacts.

Kgosi will also persuade the Colombians to do business with the Khozas and they will become their new suppliers.

The Khozas will now buy their drugs from Colombia and supply them to the Brazilians.

Meanwhile, Shaka discovers that his love Thando is the one behind the crippling of the Khozas as suppliers. She and her father have taken over the Khoza’s turf.

It looks like Shaka will have to make a tough decision, to confront Thando and dismantle the Sebatas or he will choose his love for her, either way it won’t end well.

Why The River Is Better Than Uzalo