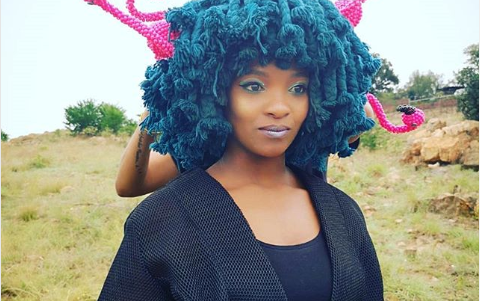 Moonchild Sanelly is bubbly and always smiling, so it was quite difficult to imagine her in tubes in a hospital fighting for her life.

But her courage seems to have pulled her through.

She contracted the life-threatening disease in Malawi where she had gone to perform at Lake of Stars international festival last month. Despite her near-death experience during her four-day hospitalisation, Moonchild still sees the funny side out of the whole ordeal saying she had “seen Jesus and he’s squint.”

Before she was hospitalised, the 32-year-old born Sanelisiwe Twisha had travelled to Los Angeles and Austria unaware she had contracted the Malaria virus.

She recalls the fear that engulfed her as she was coming in and out of consciousness not too sure what was happening to her. She had initially thought it was exhaustion from all the travelling and possibly a bad case of jetlag. Although she was much weaker than she’s used to.

A week after she was discharged, she was forced to return to hospital after she fell extremely ill once again and had to receive blood transfusion.

Moonchild Sanelly had been on medical rest for the month of November and has had to cancel all appearances and gigs she’d been booked for.