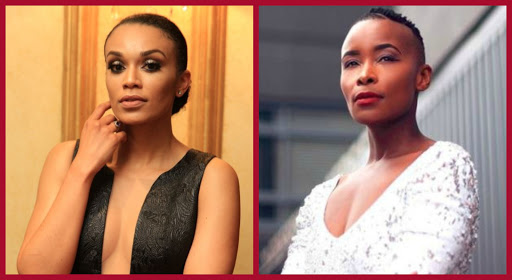 Actress and television presenter, Pearl Thusi has previously engaged in twars with a few local celebrities including Sizwe Dhlomo and Bonnie Mbuli.

This week, the mother two came out to clarify any misconceptions about the perceived beef between herself and Bonnie Mbuli.

“At this stage, I hardly really think about her, but Bonnie is someone’s mother, she’s probably someone’s girlfriend, someone’s a sister, aunt, and no matter what I harbour or feel towards her, I may have to think about those people and the fact that she matters to someone out there.”

A few months ago, a heated twar erupted between Pearl and Bonnie.

This came after the former revealed that she still gets discriminated against in the world of acting because casting directors don’t fully categorise her as black enough, given her light complexion. Bonnie then stated that it still doesn’t change the fact that she enjoys a lot of privileges and favour that other dark skinned actors don’t get to enjoy because of their complexion.

Pearl Thusi recently spoke to Tshisa LIVE and expressed that she holds no ill feelings towards Bonnie. She continued to add that she’s on that sisterhood tip and hopes everyone would just get along.

“For me, that’s the spirit of sisterhood… sisters should always get along, and for me, I think she will always be my bigger sister, no matter how she feels about me. I can only control how I feel about her. Bonnie is an incredibly talented woman. She’s beautiful and us disagreeing doesn’t mean I should hate her. Me being hurt by her doesn’t mean I should hate her… I’m bigger than that.”

Let’s hope that these two have buried the hatchet… for good!