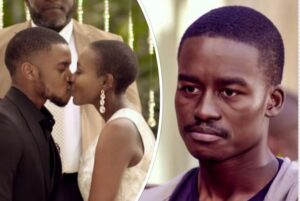 LoWednesday evening had a lot of Scandal viewers all emotional and forgetting that it’s all just acting after Romeo poured his heart out trying to stop his mom from making the biggest mistake of her life.

xm banner in article
Romeo had his doubts about Simo from day one, however, when Simo fell in love with his mom, battle lines were drawn. Blinded by love of course Grace agreed to Marry Simo who happens to be Romeo’s half brother.

Romeo stopped at nothing to uncover all truths about her mom’s boyfriend but she didn’t believe any of it. Now her hotel is at stake and she doesn’t even know it as Simo has pledged the hotel to his boss Mamba.

At the wedding venue Romeo tore down asking a few guests for assistance but none of them was willing to assist or maybe feared interfering. One could easily tell that the actor was emotionally and physically exhausted and all his attempts didn’t succeed.

Unfortunately, Romeo couldn’t speak some sense into his mother’s head. Fans were also with him crying out and some went as far as making wishes to fast track the drama series to the scene where Simo gets to take everything from Grace.

When you know you are right but no one believes you….God i know how Romeo feels.😢#etvScandal pic.twitter.com/CLC4l3miIU

When Romeo said, "Lerumo… The hotel, bro", I felt that deep in my gut #etvScandal pic.twitter.com/Bd7jWpgMwp

Advertisement
Related Topics:Scandal
Up Next

Shona Ferguson Show Off His Diamonds